Light filtered through their hotel window earlier than Kate was used to in Harvest Bay. She cracked an eye but, feeling the weariness of spending many long hours in the vehicle, she rolled over and pulled the pillow over her head.

"Are you awake?" Adam murmured. He was accustomed to waking up early, even on summer break, because of facilitating early morning football practices. Kate, on the other hand, wanted no part of being awake before half-past five on her first week of vacation.

"No," came her muffled response.

Adam chuckled. "Okay, but there's a National Park nearby just waiting for us to explore."

"Not before 5:30." Her grumbling response only awakened her more, and soon she and Adam tiptoed to the hotel lobby for breakfast while the girls continued to sleep in.

The forecast indicated the day would be cloudy and cool, not unusual for the first part of June in Maine. Adam and Kate decided over their continental breakfast that it would be a good day to take a drive on Park Loop Road and become familiar with the lay of the land. 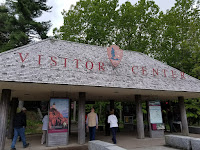 By eight o'clock, the family of four had loaded back up into the Expedition and began the short drive to Acadia National Park. They stopped briefly at the Visitor Center, where Adam and Kate gained valuable information from a park ranger regarding family-friendly hikes and other points of interest, as well as the times for the tides, sunrise, and sunset. Adam grabbed a few maps of the park, Kate bought a couple souvenirs, and they climbed back into their vehicle ready for the day's adventures. 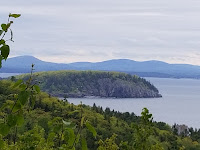 There were many, many pull-offs along Park Loop Road where tourists could get out and take in the stunning scenery, and Kate and Adam took advantage of a handful of them. Even with the cloudy weather, the landscape seemed magical to Kate. The rugged beauty - the contrast between lush, green plants and jagged rocks, mountains and valleys, calm lakes and the wild Atlantic Ocean - took her breath away. It never became monotonous. Every turn they took on Park Loop Road, there was something new to see. 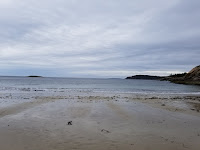 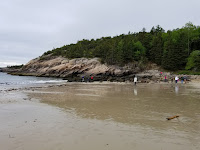 Around one of those turns was a sign for Sand Beach. Even though the weather was definitely not ideal for swimming, and they didn't bring their bathing suits, they decided to make the stop and check it out. Sand Beach was a little, inconspicuous gem, hidden between the rocky landscape on both sides. Kate had to walk to the water's edge, bend down, and touch the ocean. Chloe and Madeline each drew their name and the year in the sand while Kate snapped pictures of them. All four of them cautiously climbed on the slippery rocks off to the side of the beach, searching the tide pools for little sea creatures. Before they left, Adam spotted and pointed out a small pod of dolphins just offshore splashing and playing in the frigid water. It was the perfect way to end the experience at Sand Beach. 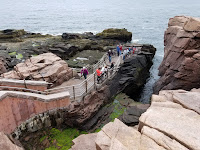 Not far down Park Loop Road, Adam pulled off again. The park ranger at the visitor center had suggested seeing Thunder Hole.
The conditions at that particular moment weren't right for the "big show" - a thunderous clap of water hitting the narrow cave-like hole in the rocks gouged out by many years of erosion, followed by an extreme spray of the water onto the observation deck - but it was still an amazing sight. Kate and Adam learned that the right time to visit to experience the boom and spray was about 2 hours before high tide and on a day when the ocean waves weren't too calm.

After a quick bite for lunch, Adam and Kate decided to drive up to the highest point along the North Atlantic seaboard, Cadillac Mountain. It turned out there was a right time to visit the mountain, too. On such a chilly, cloudy afternoon, standing on Cadillac Mountain was downright cold and the winds were brutal. Kate pulled on a winter hat and gloves she had thought to pack just in case she got cold, as reviews had warned of chilly temperatures at the beginning of June. Standing on top of Cadillac Mountain, the wind literally took her breath away, but the views warmed her heart. Kate struggled for words to describe the way this beautiful sight made her feel, but when Adam came up behind her and wrapped his strong arms around her, and Madeline and Chole stood nearby happily snapping pictures on their phones, only one word came to her mind: perfect.